"Blue noise" is a term used in computer graphics to describe noise that is uniformly distributed. It is often used in procedural generation techniques to place objects during terrain generation that require a roughly even distribution across a landscape. This post will go into an implementation of Poisson Disk sampling, a super straightforward blue noise generator that I've been using on recent projects. 😄

See my repo for the full source code here

First off, why would we use blue noise versus normal random number generation? If we compare randomly generated points vs points generated via a blue noise function, we’d see something like the two images below.

The blue noise example above was generated using the algorithm presented in "Fast Poisson Disk Sampling in Arbitrary Dimensions". The algorithm is linear w/ respect to the number of points generated (i.e. fast 🚀!), easy to understand, and easy to implement so let’s dive in!

The poisson disk sampler requires only a couple parameters to get started.

Converting this into rust, we'll get the the following:

As part of the initialization process, we'll need to create a grid that is used to store sampled points and to speed up spatial searches. The size of each cell in the grid is directly related to the radius \(r\) and the domain \(n\). In the case of a 2D grid for our example implementation, each cell is bounded by \(\frac{r}{\sqrt{2}}\) so that each grid cell will contain at most a single sample.

To understand why we use \(\frac{r}{\sqrt{2}}\) as the cell size, the insight lies in the fact that we want each cell to hold at most one point. So what is the longest possible distance between two points in adjacent cells? The worst case would be two points on opposite ends of the cell diagonal. Since this diagonal should never exceed \(r\), we can use some geometry to solve the length of the sides:

Generalizing this to the domain \(n\) we see how the original formulation comes out to be \(\frac{r}{\sqrt{n}}\)!

In our rust implementation, we’ll represent the grid as a Vec<Option<(usize, usize)>>. Each cell can either be None or the sampled point (usize, usize). Building on the example code we had before, the struct and new function should now look like below:

For the next step of the algorithm, we need to select an initial sample. This will be randomly chosen uniformly from the domain, inserted into the grid, and used as the initial point on the "active list".

First, let’s add the rand crate to our dependencies in our Cargo.toml file.

Afterwards, modify the new function so that we generate a new point after initializing the PoissonDisk struct, adding it to both grid and active list.

Putting it all together with the example code that we have so far, the new function should look a little something like below.

Finally 🎉! Now that we have the ability to keep track of points, sources for new points, and an initial sample to get started we can start implementing the core of the algorithm (Step 2 in the paper).

This step involves a loop where:

Breaking down the loop step by step, we'll first tackle randomly selecting a point from the active list. Given an active list of length \(l\), we randomly choose an index between \(0\) and \(l - 1\).

Next, we need to sample \(k\) new points around the source point. When generating a new point, we randomly choose a point that is between \(r\) and \(2r\) of the source point. This will make it so that new points will always be at least \(r\) length away from the current point. To visualize how this will look on the grid we've created, here's a visualization of the disk where valid points could possible be generated. 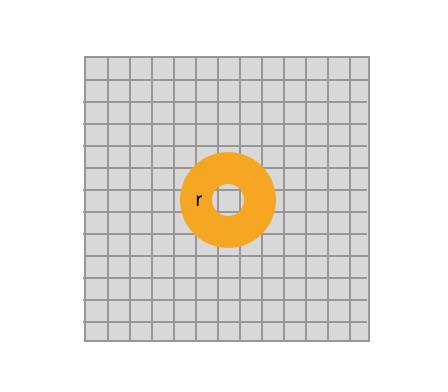 Generated points will appear in a disk that is \(r\) is size around the source point. Notice that it overlaps approximately 2 squares away from the source point. This will be important later on when we validate new points.

The trick to sampling a point inside this disk is to use polar coordinates! Polar coordinates are represented by a distance and angle from a reference point (see image below for an example). Using the source point as our reference point, we randomly choose an angle and a random radius that is between \(r\) and \(2r\) and convert this back into cartesian coordinates. 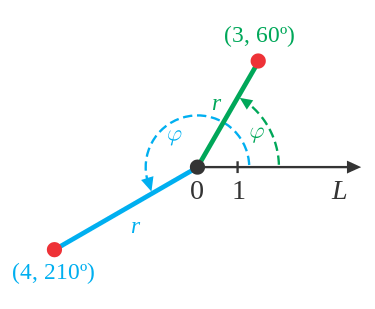 An example of polar coordinates in action courtesy of Wikipedia

Using this knowledge, lets create a new function, generate_around, that will generate new points around the source point:

Now that we have a new point, how do make sure it's a "valid" point?

Note that in our generate_around function we already ensure that new points are within our width/height bounds, so we only need to check if the point exists within \(r\) of other points.

The grid that was shown earlier can be used to quickly search for neighboring points. Lets bring back the image we used before to showcase the disk area where sampled points will appear.

As mentioned before, each grid cell is sized in such a way that there should only exist a single point in each cell. Since each cell is a smaller than the radius (\(\frac{r}{\sqrt{2}}\)), the neighborhood around the source cell will be at most 2 cells away.

To find the start and end coordinates of the neighborhood, we'll determine where the point exists in the grid and +/- 2 from the coordinates.

Our is_valid function should now look like the following:

All that is left is to make sure any source point that were unable to generate valid sample points is remove from our active list.

Putting it all together, the example code should now look like the following:

And there you have it! Check out the code repo to view the code in it's entirety along w/ the WASM visualization that was used for this page.