We Choose To Go To The Moon

In an inspirational and aspirational speech to a crowd of 35,000 on September 12, 1962 John F. Kennedy outlined his goals for the nation's space effort.

JFK's rally around the space race was incredibly important and very intentional at the time. The year the speech was delivered, there was a perception that the Americans were losing the space race. The Soviets had launched Sputnik and put the first man in space. Landing on the moon seemed like an impossible feat, especially when it seemed that the nation was already far behind.

Ever since hearing about the speech, Kennedy's words continue to resonate with me, a reminder in tough instances that sometimes we do things simply because they are difficult, because they are uncomfortable, and because the challenge is one that will push us farther than we ever could before. In a single powerfully compelling moment, Kennedy turns the act of facing the challenge itself into one that serves to push us as a human race and as humans. Kennedy wants us to relish the fact that we are seemingly behind because the the act of landing on the moon will be that much greater of a victory in the end.

However, it can be silly to do something because it's hard, as the following XKCD bit illustrates. There has to be a little substance to make the challenge worthwhile. 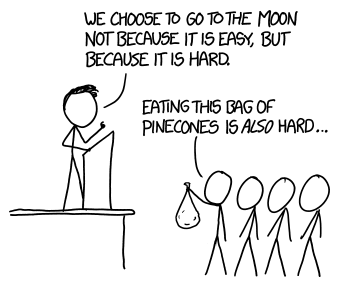 Of course, a worthwhile challenge is hard to define and find. This is especially evident in an age where any issue, big or small, can be instantly heard by millions, if not billions, of people around the world. Some have lamented the youth stating that there seems to be a disconnect between what they believe is worthwhile and what is not. Others point to our generation as largely mission driven and moreso than previous ones. Personal observations suggest a mixture of both and as part of the lamented youth, all I can say is that time will tell.

After Kennedy's speech in 1962, it wasn't until 1969 that the United States landed the first humans on the moon, ending the Space Race and creating the incredible legacy that still lives on to this very day. Recently, the New Horizons probe reached its destination after 9 long years, capturing never before seen images of Pluto in incredible quality and providing scientists with innumerable important observations.

The ending thesis, if there was one, is that in the midst of the nitty gritty of trying to solve difficult problems, we sometimes lose sight of the reasons that brought us here in the first place. Maybe it was the desire to push forth the human race, save the planet, or maybe it was to push ourselves into uncharted terrority. Whatever the reason, no matter how far we feel we may be behind, or how difficult it may seem in the moment, the challenge must be one that motivates, accept with, and relish with every single fiber of our being. And, most of all, one that we intend to win.